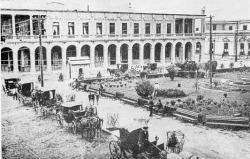 Beyond the geographical peculiarities of the three regions conforming the State of San Luis Potosí, the ethnic groups which populated each zone until the 16th century, were determining in its historical process, in addition to the course taken by the Spanish settlements on each one of these regions.

Inhabited by Chichimeca tribes, the high lands —the Altiplano and the Media region— were dominion of smaller groups such as the Macolias, Pames, Guaxabanes, Guanames and Guachichiles. The Tenek or Huastec settled on the East zone, the lowest of all, where Hernán Cortés started the Spanish occupation in 1522, a little after conquering the Great Tenochtitlan; after dominating the zone, he created the encomiendas, founded the village of Santisteban del Puerto at the South shore of the Pánuco River and reserved for himself the señorío de Oxitipa. Nuño Beltrán de Guzmán arrived in 1524 as the governor of the Pánuco’s province and when he was later designated President of the Primera Audiencia de la Nueva Galicia, he despoiled Cortés of his dominion, while he was a the Hibueras and then founded the village of Santiago de los Valles Oxitipa in 1533.

The first evangelizers of the Huasteca were the Agustinian frairs Antonio de Roa and Juan de Sevilla who arrived around 1530, also Fray Juan Estacio, who came ten years later. The Franciscan Andrés de Olmos’ arrival took place in 1550; he was the missionary who founded the convents of Tampico, Tancuayalab and Tamuín, and set the basis which made the evangelizing labor in the area easier.

A long period of confrontations between those seeking for gold and the ones defending their land and freedom had followed; the bloody fight called Chichimeca War lasted for almost 50 years, and ended thanks to the clever negotiations made between Spanish and Indigenous by the mestizo captain Miguel Caldera before the end of the 16th century. While pacifying the territory, the Spanish transfered Tlaxcalteca groups into this lands, so they would help culturizing the nomad groups by following their example; constituting this way, various settlements which turned into important highland towns nowadays. The Río Verde region’s villages were founded by other Spanish groups who came in 1597 from Querétaro, along with Fray Juan de Cárdenas, who took care of the area’s evangelizing first stage.

After the Charcas mines’ discovery in 1574, the Chichimec War stopped the search for other mines, reason why it was until 1592 when the mineral deposits from the San Pedro’s hill were found, originating the foundation of today’s State’s Capital. At the beginning of the 17th century, the territory was pacified and the missionaries’ labors, as well as the culturizing developed without mishaps. When the mines of the Pinos mountain range, together with the ones of Ramos and Guadalcázar were discovered, their exploitation worked on the basis of black’s, mulatto’s and indigenous’ slavery; the haciendas with mineral exploitaiton mines were abundant, besides the establishment of cattle ranchs such as Peotillos, Gogorrón and La Parada. The missionaries who started the evangelizing labor at the Altiplano, on the Río Verde zone and in the Huasteca, left a considerable infrastructure which was later used by the Franciscan who followed.

The veins of Los Catorce, one of the richest New Spanish mineral deposits, started being exploited on the 1770’s decade, when the Potosin territory was almost uncoverable; since one of the twelve administrations on which the New Spain was divided into, included what today are the States of Nuevo León, Tamaulipas, Coahuila and Texas; area which was reduced to less than 24 thousand square kilometers when the State of San Luis Potosí was constituted after the Country’s freedom attainment.

The battles between the realist army and the insurgent troops were numerous, as well as countless the names of those who fought in the State in favor of the independence. As it happened in many spots, various Church’s members responded to Miguel Hidalgo’s calling, among them were the Juanin frairs Luis de Herrera and Juan Villerías, along with the Carmeite Gregorio de la Concepción, who supported the military followers of freedom cause’s and even those who had lead any revolt. Heroic actions followed one another in both factions, and as the fighting motives began being assimilated, the opposite bands defined. Among the men of arms who left glorious trace, are the Potosin Mariano Jiménez and the Spanish Francisco Javier Mina, as well as the locals from Bocas, Venado and Santa María del Río who formed the Los Tamarindos and the Fieles de Potosí battalions. On the year 1824 the Free and Independent State of San Luis Potosí was consituted and two years later the first local Constitution was sworn.

The time the insurgent fight lasted did not restrained at all the social advance, although in the Capital there was only one secondary school and just a few of primary instruction; and of these, just one was for girls. The productive mines were Charcas, Guadalcázar, Ramos and San Luis hill, but by far, the star was Real de Catorce, which had reliable metals and modern exploitation equipment. The great agricultural and cattle properties aroused and grew on the Media region; the economy was booming thanks to the trade at Ciudad del Maíz y Armadillo, place of the first State’s printing shop, opened since 1813. Meanwhile at the Huasteca, the numerous native population still lived following their own customs, not adapting to the new ones.

In the short period when Ildefonso Díaz de León was the first State’s governor, the slavery was abolished, the Casa de la Moneda and the Colegio Guadalupano were founded, and also the first Capital’s theater and the Cañada del Lobo’s aqueduct were built; in addition to the first local newspaper’s appearance. The following decades were chaotic in the whole Country. San Luis Potosí also paid its quote: it lost its sovereignty for ten years and gave away abundant material goods and many lifes to the armies with which Antonio López de Santa Anna tried to suffocate the uprisings in Texas and Tampico. The Comanche invasion on the North of the State came in 1841, and later on the war with the United States of America, which meant new sacrifices of all kinds. With the lyrics of the Potosin author Francisco González Bocanegra, the Mexican National Anthem was presented on September 16th of 1855. From that year on and until 1860, the State was alternatively in liberal and conservative hands. In 1863 the French seized Puebla and in June, Benito Juárez arrived to San Luis Potosí, where the National powers remained until the same year’s December, and came back four years late. At the Potosin Capital’s Government Palace, Juárez denied the pardon to Maximilian of Habsburg, to the Imperialist, generals Miguel Miramón and Tomás Mejía as well.

The revolts between liberal groups continued for several years, until 1870 when general Mariano Escobedo was nominated as the State’s governor. During the Porfirian period, the railroads were built and relevant architectural works were raised up: the Penitenciaría, the La Paz Theater, the San José ditch and many of the private buildings which embellished the Capital and the most flourishing haciendas of the State. Outside the Capital, many textile industries aroused, as well as an hydroelectric plant, and the cattling activities progressed, while the oil exploitation began in the Huasteca region. Thanks to the construction of the Ogarrio tunnel in Real de Catorce, the mining had a resurgence which reached Matehuala and favored the commercial development in many towns. As for the cultural life, poet’s Manuel José Othón and bishop’s Ignacio Montes de Oca brightness was present. Díaz Soto y Gama, the Sarabia brothers and other intellectuals exposed the dictatorship’s injustices and spread out revolutionary ideas.

Francisco I. Madero carne as a prisioner to San Luis Potosí in 1910; soon after his escape, the Plan de San Luis was published and the Revolution started in the State through upraisings in several towns. The Cedillo brothers raised at Ciudad del Maíz and Pedro Antonio de los Santos fought in the Huasteca until his execution in 1913. Cleofas and Magdaleno Cedillo continued fighting until they were killed in combat, while their brother Saturnino stayed with the movement until its conclusion, and even later he fought against Adolfo de la Huerta and the cristeros; he came to be general of division, and had been the State’s governor and Agriculture minister during presidents’ Pascual Ortiz Rubio and Lázaro Cárdenas regime.

On the last one hundred years, San Luis Potosí followed the course of the Country. There was a quick population, towns and social security institutions growth; the schooling sensibly grew and the distances were shortened with modern communication paths. As it happened on the New Spanish period, San Luis Potosí presently is the spot where the northern and the central States connect with the Gulf and the Pacific ones.

San Luis Potosí preserves its legacy with fervor. The costums of the native ethnic groups as well as the sonorous toponymy are notorius in the Huasteca: Tancanhuitz, Xilitla, Taninul, Tamasopo, Tamuín. The Viceregal times left an indelible track which can be observed through the Potosin habits and idiosyncracy; and keeps names of unmistakable Spanish mark —Alaquines, Aranzazu, Guadalcázar—, for the hundreds of saints’ names used as a preffix to their first names, such as the Capital’s and the own State’s one. Gardens, streets and towns got their name or last name —de los Infante, de Hidalgo— from facts and characters of the 19th century, although it is made use of those only formally. The eagerness for reaching modernity is the 20th century’s legacy, and the Potosins are accomplishing it in harmony with their rich past.

Point of union between North and Center, between the Gulf and the Pacific, where different races encounter, San Luis Potosí preserves a lot of which characterizes the Country within the corners of its towns and along its magnificent spaces granted by nature. Its personality and wide range of costums have known how to leave its track on the entire Country’s life. Its territory keeps the wealth inherited from the native groups who had lived in it; as well as the legacy from the Spanish conquistadores and that of the modern and contemporary Potosins who have had their own way of conceiveing life.

This book attempts to give a vision of the natural and created abundance of San Luis Potosí, which has been called Heart of Mexico; perhaps because of being the Federal State that has the more neighbors —ten, according to a popular song, nine in fact— along its borders. In order to become acquainted with it, we propose seven routes; the first three of them go through the Capital’s historical center, its neighborhoods and through some places that had joined the urban nucleus.

The routes that have been designed to visit the State’s interior start from the Capital and, while following the itinerary on the adviced order, they return to the starting point. They are planned in such a way, that they can be accomplished in two days each one, unless the visitor succumbs over the villages’ charms, and decide to stop and stay longer in any of the places. This way, the fourth route leads us towards the South, filled with towns, baths, haciendas, landscapes and famous crafting traditions. The fifth one heads to the North and has a foundation taste and specially, a melancholic and nostalgic sense for mineral dreams. The sixth itinerary visits the Media region, the Río Verde’s basin, full of towns which, on the 17th century, originated under the shelter of cattle ranches, fertile lands and rivers running through the mountains and falling into beautiful waterfalls. Finally, the seventh route takes us to the exuberant Huasteca, where the tropical greenery predominates along with a joy for life in a huapango rythm.

The different culturizing and mestization processes, along with the affectionate and unmistakable landscapes —which had been marked by its particular historical developments—, had been sealed upon the urban characteristics, as well as on the costums and traditions, and on the festivities and daily life of these other Mexicans. 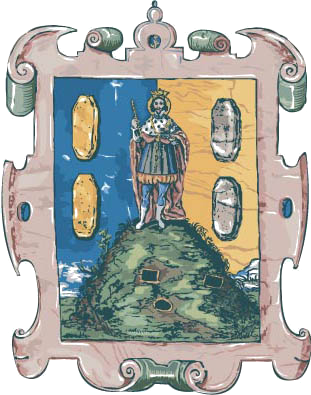